The Kings of Castaway Island

I have just discovered your excellent Beezer webpages, as I have a couple of Beezers from 1958, numbers 29 and 31 from August of that year. I was researching The Kings of Castaway Island to see if I could find any more of these fascinating (albeit improbable...but that is the joy of comics...) stories.
I found that you had a reference to the Bushwhacker, and that you had been advised by another reader that the story began in 1960. Well, there is definitely a Bushwhacker in these two comics, featuring Slim Silver, his young brother and sister, Bob and Tess, a journey across the trackless outback of Australia, with Karamee, an Aborigine friend, and Ted Blake, a jet pilot. Their adventures are highly improbable, but very exciting and entertaining!
I would like to read more.... and of The Kings of  Castaway Island!
Yup you were right, The Bushwhacker did appear earlier. There were three series between 1956- 1961 and the last series ran from 24.09.60.
I remember Kings of Castaway Island well as it was reprinted from 1967-1969 which is when I first started reading the Beezer. 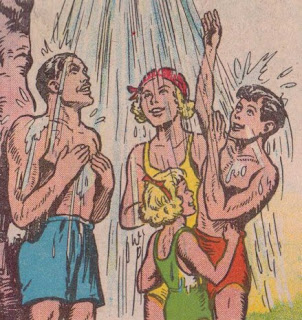 The story was about the King family who were marooned on a mysterious island off the African coast when their plane crashed. Set during World War II the island was eventually invaded by Japanese soldiers. The depiction of the Japanese was incredibly racist – bright yellow skins with slit eyes. 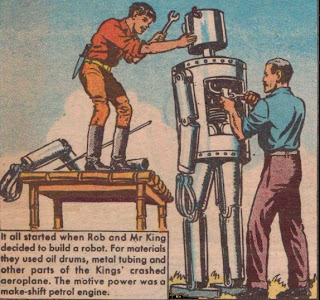 The story had the most ridiculous storylines. In one episode the King family actually managed to make a walking, talking life sized robot from the remains of the plane.
What I really remember about this series is that it was one of a few that actually reached a conclusion. They were rescued in the last episode (issue 6.12.69). Sadly this is one of the few issues from 1969 that I don’t possess though I’m always looking out for it on ebay.