Occasionally 'The Beezer' would crossover into other D.C.Thomson publications. This was hardly surprising as artists didn't draw exclusively for 'The Beezer'. A couple of crossover examples can be seen here. The first example shows 'Oor Wullie' (drawn by Dudley D.Watkins, who also drew 'Ginger') for the 'Sunday Post. Here we see him trying to sell his old Beezer to use as wrapping for fish and chips instead of newspaper - What a sacrilege! 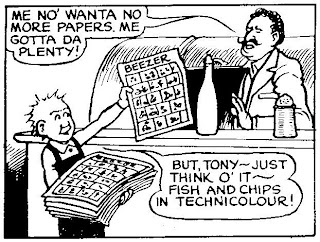 The next image is from the first issue of 'Bunty' (1958). Bill Ritchie (who drew Baby Crockett) has drawn a strip wherein 'Toots' is reading her favorite comic which is, of course, 'The Beezer' 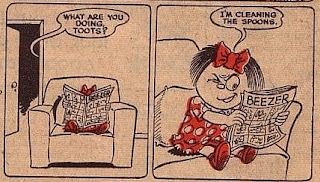 While we're on the subject of 'Bunty' I'd like to take this opportunity in drawing your attention to the 'Bring back Bunty' blog which is a call for a revival in British girl's comics.
Posted by Simon Mackie at Saturday, April 16, 2011