Most years 'The Beezer' gave out a couple of free gifts a year. This would usually to be to either soften the blow of a penny cover price increase, to herald the change of a couple of characters or to change the new front page title logo. In spite of price change the Beezer actually upped its page count a couple of times. From the late 50's to early 60's it increased from 12 pages to 14 and finally in 1964 it went up to 20 pages.

I am sure that there was a short television commercial advertising this free gift with an an animation of Ginger playing the tootle flute. Anyone else out there remember? 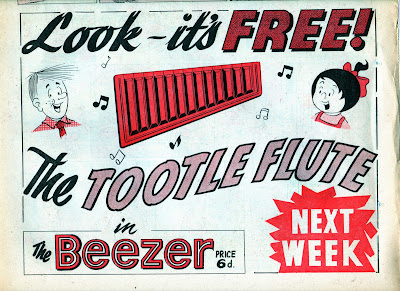 A hugely disappointing free gift came one week later with these uncharming images that you were meant to stick onto a balloon. Funny faces? Not really. I remember feeling very cheated by this.

Anonymous said...
This comment has been removed by a blog administrator.
1 February 2010 at 12:57

I definately got these 1970 free gifts, Simon: it's the 'stick-on' funny-face balloon I remember the most; I think there was glasses and eyeballs that were peeled from a flat, vinyl-like sheet: at the time, I honestly thought that this novelty was OK!

A very memorable free gift came from 'TOPPER' [possibly in Winter 68-'69]: this was a pack of small transparent celluloid sheets, that were used to put together funny faces.....one of the most memorable-ever free gifts of this era, to me at last...