Social History through 'The Beezer' No 1 : The Recording Booth 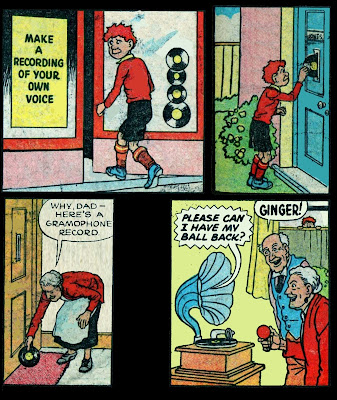 1) Ginger and the 'Voice Recording Booth'
Here's a lovely Ginger strip a from a very early Beezer (1956 - its first year) drawn by Dudley Watkins. In this story Ginger has been persistently kicking his football over his neighbour's fence. Aflter one too many scoldings he loses his nerve and has to resort to recording his voice in order to ask for his ball back. We see Ginger going to a recording booth in order to record his message

In the 1950s the only way many people could record their own voice was to use a voice recording machine which actually transferred your voice onto a record.

In those days your recording couldn't last any longer than two minutes and voices were laid down on a six-inch cardboard record that could then be played at home. Alot of real-life recording artists started out this way including a certain young singer called Elvis Presley.

The Voice-O-Graph was the most widley used record recording booth. It was similar to a photo booth and let the patron make an actual 6" record which could be played on any record player.

The International Mutoscope Company manufactured the last recording booth coin-ops in 1968. When portable cassette recorders caught on in the 70’s, the booths started to lose their novelty value. Besides, it was embarrassing when the whole arcade overheard your so-very-unlike-the-King Elvis impression.
Links:
Remembering Recording Booths

in common with ELVIS, the BEATLES also recorded their earliest material using a shop method similar to this: [though they were probably still known as the Quarrymen back in the late 50s].