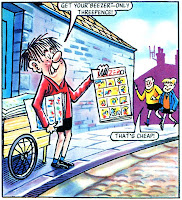 Bill Ritchie, prominent cartoonist with the Beezer, passed away on Monday.

He was born in Glasgow and studied at the Glasow School of Art. He was the comic's longest running cartoonist working with the publication from 1956 - 1990.

While serving in the army in Korea, he submitted his first cartoons to the publisher, which were printed in The Weekly News.

He started working with 'The Beezer' at the young age of twenty four and drew Baby Crockett, Dicky Burd, Smiffy and Hungry Hoss for the comic. He also drew for other D.C Thomson publications, namely: Sparky, Bimbo, Bunty, The Beano and The Weekly News.

He had a wonderful, fluid and totally unique style, drawing with thick jagged lines that showed exuberant confidence. His work was just genuinely sweet. 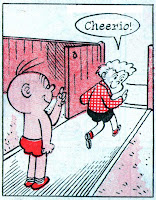 "It's with great sadness that I have to pass on the news that Bill Ritchie passed away on Monday of this week. Bill's enormous catalogue of work will be well known to every British comics fan. For those of us who worked with Bill, he was one of the folk you always looked forward to seeing. You knew you'd have a good laugh and an interesting chat with Bill. His knowledge of comics and artists was extraordinary. And he was just a really nice guy, always gracious and helpful. A genuinely nice man who will be missed greatly by all of us who worked with him."
Posted by Simon Mackie at Thursday, January 28, 2010

BILL was definately among the dozen or more artist who summed up all that was great about the BEEZER, and the comic would have lacked a lot of it's built-in charm without his output. I actually remember BABY CROCKETT from mid-60s BIMBO, which seemed to contain seperate stories drawn for very young readers: did BILL draw two seperate strips of this character weekly, I wonder? PIP the PENGUIN was another fine creation from this period.


Special mention must also go to BILLS' excellent colour work in the BEEZER annuals: one early 60s undated book I have has BABY'S home-drawn diary, in which he draws childish drawings of Hitler and Churchill: filled with charm and wonder.

Any BEEZER fan should check out BILLS' excellent colour work in the BEEZER books: a real treat!

Yes Rab, Bill drew Baby Crockett for Bimbo as well as The Beezer. The character was starring in two comics at the same time - Baby Crockett ran in The Beezer from 1956-1990 and in Bimbo from 1960 - 1972 and its successor Little Star from 1972-1976.
I really agree with you about his brilliant use of colour in the Beezer annuals. The above image of Smiffy is from the 1969 annual.