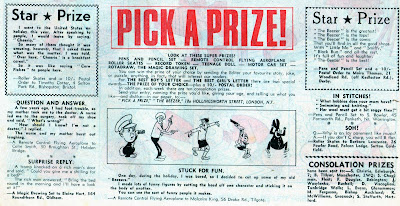 The Pick A Prize Section ran for many years throughout the sixties and seventies. It consisted of readers' Christmas cracker style jokes or amusing anecdotes. Parents were always referred to as Mummy and Daddy when written about which suggests that letters were usually submitted by well brought up, middle class children

If your letter was published in the Beezer you could win one of the following; a pens and pencil set, a remote control aeroplane, roller skates, record token, teenage doll, motor car set, rotadraw (what's that?) or a magic drawing set. Two special prizes plus 10/- (50p) were awarded the to the best letters. The prizes never seemed to change: they remained the same for years.

I'll never forgive the author of the letter below and I remember it so well. He actually suggested that, to relieve boredom, readers should cut out the heads of Beezer characters from the comic and stick them onto the bodies of other characters. I did this, ruined dozens of my old Beezers and have regretted it ever since. Malcom King, wherever you are, I hate you!

Or how's about the letter from a reader of Express Weekly 1959 vintage, so wrote that he cut up all his favorite strips and then glued them onto board so that he could make jigsaw puzzles out of them.

Excellent! - even better than than Viz's Top Tips.

I'm guessing a rotadraw is the same thing as a Spirograph, a pretty popular item for kids in my day.