The History of 'The Beezer' 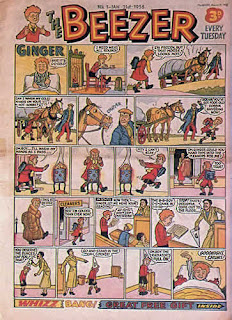 From 1956-1981 the Beezer was a large format (tabloid newspaper/A3 sized) weekly British comic published by D.C Thomson in Dundee. Along with its sister comic the Topper it dominated the comic stands from the late 50's to early 80's until it was cut down to A4 size. For many years the comic retained a charming consistency. Fantastic artists like Dudley.D.Watkins, Bill Ritchie,Leo Baxendale and Mal Judge contributed to the comic. The characters rarely changed and when you opened up the comic every week you knew exactly on what page they were going to be. Sadly, when it was shrunk in size, alot of the original artists left and the characters and formats changed. The Beezer continued until 1990 when, after merging with the Topper, it eventually was incorporated into the Beano. This blog is solely devoted to the glory years of the Beezer when quality, style, consistency and above all size mattered.
Posted by Simon Mackie at Saturday, January 16, 2010

Hi. I just found this site today, so this is my first post. I am especially interested in finding out about the early 1960s series "Spacewhacker" - in colour on the back page of the Beezer, round about 1962-64. Can anyone tell me where I can purchase copies, or see some of the original artwork? I would be most grateful. Many thanks. Bob

The best way to collect ‘Beezers’ is from eBay. This requires patience as more often than not you won’t find what you’re looking for. It just requires persistence. Some days you might even find a run of 20-30 issues. Collecting them is not cheap. For the years you are looking for (1962-64?) expect to pay £5.00 per issue plus between £1.50-2.00 for package and postage.

I'm late to the party, but wanted to thank you for your excellent blog. The usual sources (Wikipedia, top links on Duck Duck Go etc.) have very poor coverage of the Beezer, so this is a welcome an oasis in the desert.

Hi, does anyone remember the centerfolds with amazing colourful educational pictures? Which comic ran these?. I think it was The Beezer, or the Topper. Definitely a larger size than A4.
Paul Waite.

I remember The Eagle in the 50s.